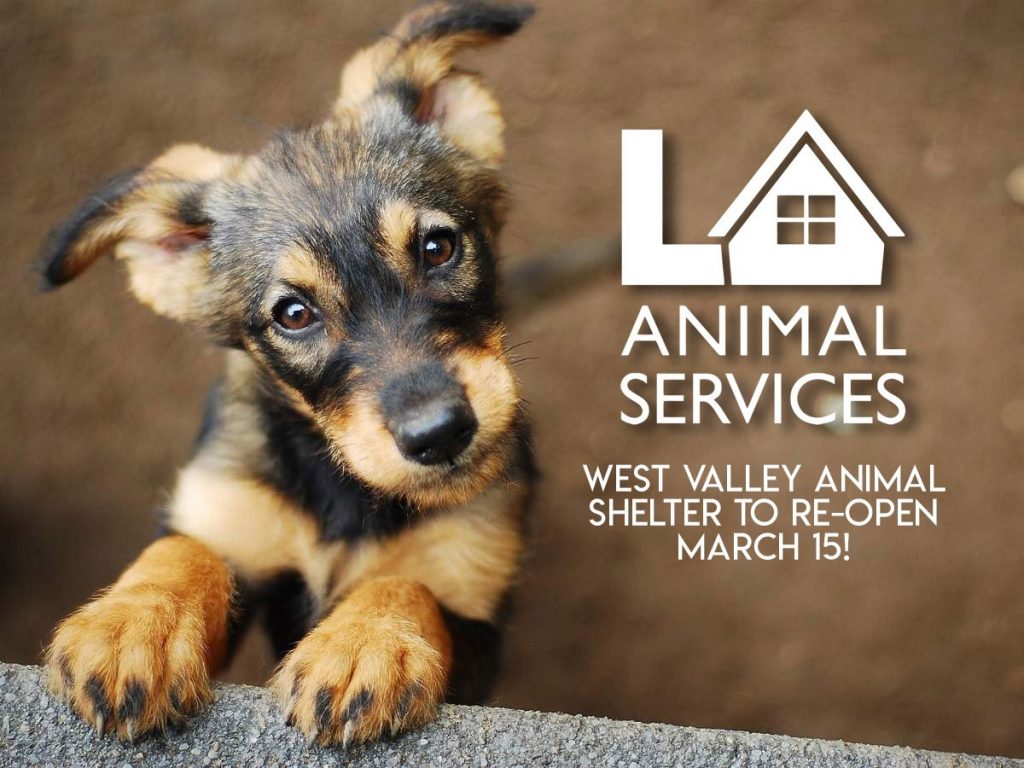 The Chatsworth shelter will reopen next week, after being closed for almost a year. All six Los Angeles-operated shelters will be open.

The West Valley Animal Service Center, which has been closed since April 2020, will reopen March 15, officials announced today.

On Feb. 18, the Los Angeles Department of Animal Services announced that tentative plans were underway to reopen the West Valley and North Central Valley shelters March 14 with current staffing, provided the number of COVID cases remained steady. It has, and Councilmember John Lee confirmed the plans in a news release.

“Since last summer, I have fought to get the West Valley Center reopened as a city-operated animal shelter, and I’m very glad to let our residents know that we succeeded,” Councilman John Lee wrote. “Without this facility, the entire San Fernando Valley would only have one city-operated animal shelter and neither I nor the Valley’s millions of taxpaying residents were okay with that outcome.”

The city’s six shelters will now be open after March 15. The West Valley and North Central Animal Service Centers (located near downtown Los Angeles) were closed April 13, and their animals and staff were reassigned to the city’s four open shelters. At the time, Animal Services Director Barnette said that the move occurred because there was not enough staff to care for animals at the shelters, and she worried the pandemic would exacerbate this.

“We have 348 employees and several vacancies that we have not been able to fill. Of the 348 employees, 80 are currently off due to COVID-19 and non-COVID-19 related matters,” she wrote in a news release, noting that if any staff are exposed to COVID or tests positive, they and everyone around them would need to quarantine for two weeks. “In short, this scenario could have resulted with an Animal Services Center full of animals with not enough staff to provide the care these animals need and deserve.”

In June, Barnette announced a controversial plan to turn the West Valley Shelter into a community resource partnership with New Hope Rescue Partners, a private organization that helps place shelter animals into foster homes. The center would partner with different rescue organizations to provide services like spaying, neutering, wellness exams, training, and microchipping at their own expense.

Critics countered that the shelter already offered those services, and that Barnette was exaggerating the shelter’s budget crisis. They also pointed out that the West Valley Shelter is the only city shelter with air conditioning in its kennels, and room for horses and large animals, and if it closed or downsized, a large portion of Los Angeles would be underserved.
“We would like to know why the employees of the city of Los Angeles cannot staff the West Valley Shelter, and do the job that’s been given away to community organizations,” residents said during a July community meeting.

But now the West Valley Shelter remains intact. Barnette announced that the shelter will operate with certain limitations, including masks and social distancing; adoptions by appointment only; limited counter service; no general public access; and possibly different hours of operation.
Barnette also said that staff are working on a plan to bring back limited numbers of volunteers, who will maintain strict COVID safety protocols, work in two-hour shifts, and avoid other staff members.

“The success of reopening these two shelters will fall on DAS shoulders and require teamwork and community cooperation,” Barnette wrote. “If we are successful in following the strategies we developed during COVID – including new community partnerships – developing new strategies to help animals and the people who love them, this will be a win for the animals and for the communities we serve.”

Councilmember John Lee said that he spoke to numerous volunteers and residents who were against the Community Resource Center proposal. “Re-opening this facility as a City-operated animal shelter was a top priority,” Lee said.

Los Angeles Mayor Eric Garcetti, who also championed the shelter’s reopening, said the announcement is good news for city animals, who are in unusually high demand during the pandemic. “COVID-19 has upended our lives and our sense of normalcy, and it has reinforced the necessity of facing unprecedented challenges with creativity, compassion, and resolve,” he said in a statement. “Reopening this shelter will help save the lives of countless animals in the West Valley and ensure that they each have a home where they are loved, cared for, and valued.”

The shelter is located at 20655 Plummer Street in Chatsworth. The other five city-operated shelters are: