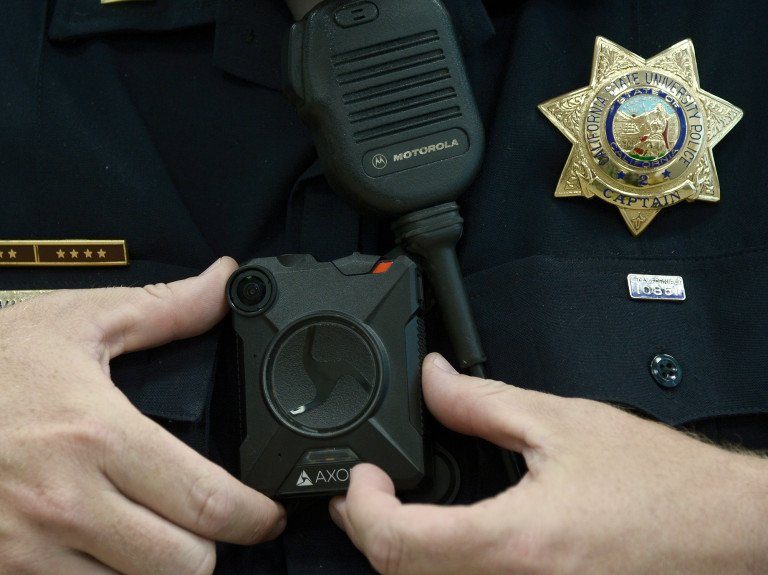 For Cal State Northridge’s Police Services the decision to begin wearing body cameras was an easy one.

“This is not new technology,” said CSUN Chief of Police Anne Glavin. “It’s been around the country; it’s just that it’s our turn. And part of it was the amount of time for researching it, deciding which company to go with … I think the fundamental issue of ‘should we shouldn’t we’ to me was essentially a no-brainer.”

Officers began wearing the cameras on Aug. 28, a move that Glavin said “takes us to another level” with regard to professionalism and maintaining the public’s respect.

“Particularly if they’re dealing with difficult issues that sometimes have two sides and can sometimes be contentious,” Glavin explained.

It’s important for CSUN police officers to maintain truthfulness to not only the students, but to the campus community and outside stakeholders, said Clarissa Rojas, chief of staff for Associated Students at CSUN, in. statement.

“The body worn cameras will improve police practices and increase credibility among the community,” Rojas’ said. “As a student leader, I commend DPS for taking the lead in this matter, especially as a university operated police department.”

The police department, which has allocated 28 cameras for sworn police officers, seems to be taking on the new equipment without pushback, the chief said.

“I did not experience any level of resistance from our department, and I think that’s terrific,” Glavin noted. “I’m really pleased with that.”

The initial cost to purchase the cameras was $45,000 and will eventually total $185,000, once all the associated data and new cameras are factored in at the end of five years, CSUN Police Department Capt. Scott G. VanScoy.

The encrypted data includes what time the video is shot.

“If you try to make a change, it will corrupt the video file,” VanScoy noted. “It’s a high tech system to ensure integrity with evidence.”

The camera the department wears, VanScoy explained, is a Taser Axon Body 2 camera that attaches via a magnet on the uniform. It’s designed to set on the center of the chest.

An activation button is used to turn on and off the recording device, VanScoy said, which he described as “simple to operate.”

Every two minutes the camera is recording, a beep will be heard, the captain said.

“That tells the officer and it tells the person we’re talking to that it’s still recording,” VanScoy noted.

“We don’t have to worry about issues of transfer of data to them,” VanScoy said.

The footage is downloaded not onto software but an encrypted cloud-based system, the captain explained.

Cameras will be turned on during calls for service but not for private conversations, authorities said.

Additionally, there’s options given for “specific sensitive situations” such as a sexual assault investigation, VanScoy said.

Making a request of body camera video, VanScoy explained, is the same as making a public records request.

“We follow the same protocol,” the captain said. “When you make an official request, we have so many days to respond. The only times we’ll say no is where it’s an evidence code or where it’s a penal code or HIPPA (Health Insurance Portability and Accountability Act) … medical records are not released.”

Body cameras are part of a larger effort to “enhance” what officials say is an already strong bond with the campus community.

Glavin was recently recognized by the Anti-Defamation League for the department’s training requirements, which are designed to ensure cultural sensitivity and protection against hate crimes on campus, officials said.

The department also trained with the Anti-Defamation League on ways to be more sensitive and inclusive, according to a campus statement.

“Our officers are very good at understanding the importance of sensitivity in our diverse community,” Glavin said in a statement announcing the cameras. “We work hard to understand the best ways to serve our campus.”

The department has also been working to educate the community on safety tips for emergency situations.