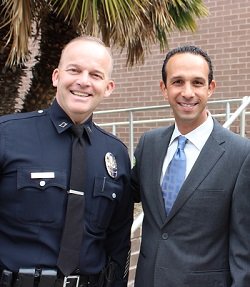 Captain Brian Pratt was born and raised in Youngstown, Ohio until 1981 when he moved to Southern California. Captain Pratt joined the United States Marine Corps in 1982 and served four years of active duty in both California and Hawaii. Captain Pratt joined the Los Angeles Police Department in 1988 and served as a police officer in Central, Southeast, and Rampart Areas as a patrol officer, Special Problems Unit officer, and Gang Enforcement Detail officer.

In 2001, Captain Pratt was promoted to Lieutenant I and returned again to Southeast Area as a Watch Commander. While at Southeast, Pratt worked closely with both the business and residential communities to strengthen the police-community relationship. In 2003, Pratt was promoted to Lieutenant II and selected as one of the Department’s first Gang Impact Team leaders. Pratt was assigned to the West Los Angeles Area where he developed strong relationships with the residential, business and elected leaders. This collaboration proved to be a powerful force in reducing actual gang crime and the communities’ perception of crime. In 2005, Captain Pratt was selected to be the Commanding Officer of Rampart Area Detectives, where he continued his efforts in violent crime reduction and improving the police-community relationship.

Captain Pratt holds a Bachelor of Arts Degree in Criminal Justice Administration from the Union Institute and University. Additionally, Captain Pratt has graduated from the University of Louisville, Southern Police Institute, Session 114, and the Federal Bureau of Investigations National Academy, Session 230.

Captain Pratt has been married for six years and enjoys spending his spare time with his family, golfing, and a variety of fitness related activities.