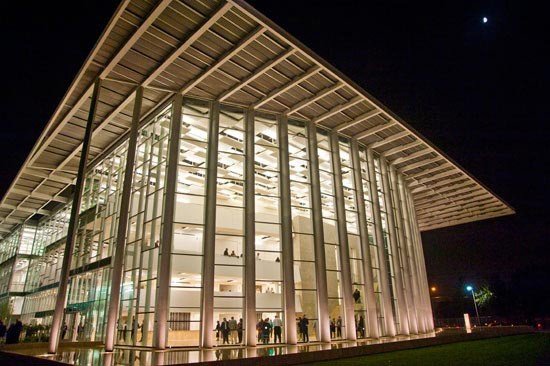 Blame it on Natalie Portman.

If you want to see “Swan Lake” in L.A. before the Oscars, there’s really only one show in town. And good luck getting tickets to the one-night-only, Feb. 8 performance by the Russian National Ballet.

That programming coup—coming on the heels of Portman’s star turn in the Academy Award-nominated “Black Swan,” which prominently features the Tchaikovsky-scored ballet—belongs not to Royce Hall or the Dorothy Chandler Pavilion but to the newest venue on the local stage: the Valley Performing Arts Center.

The Center, which has its gala opening Saturday, is making its mark with a diverse inaugural season that ranges from speakers like Joan Rivers, Arianna Huffington and Shirley MacLaine to the musical stylings of artists as varied as Patti LuPone, Marvin Hamlisch, Rosanne Cash, Loudon Wainwright III and Dame Kiri Te Kanawa.

And “Swan Lake,” with its almost-too-good-to-be-true Hollywood tie-in, has proven to be a hot ticket for a new audience base. “I should say, of course, I intuited this,” laughs Robert Bucker, executive director of the center and also dean of the Mike Curb College of Arts, Media, and Communication at California State University Northridge, where the new performing facility is located.

“An amazing number of single ticket purchasers have just wanted to see the ballet.” Bucker says there also have been “robust” single ticket sales for LuPone and Mandy Patinkin, appearing together on May 21, and for Hamlisch’s Feb. 26 appearance with Betty Buckley, who won a Tony for her performance in “Cats.”

“There was a tremendous response to Joan Rivers [March 1], as you might imagine,” he says.

Bucker says season ticket sales also are going well, with more than 800 sold for performances in the 1,700-seat hall.

Booking the center to serve all of its constituencies—people from San Fernando Valley communities, CSUN and the region as a whole—requires a certain nimbleness, along with connections to performers’ managers around the world.

“The moment that you enter into that community of facilities—I wouldn’t say it’s cutthroat competition, but when opportunities present themselves you truly take advantage of the opportunity,” Bucker says.

Having a high-profile new $125-million facility helps. “Folks are really excited about being part of ‘rubbing off the new,’ ” Bucker says. “It’s a very desirable place for an artist to perform.”

“It’s gorgeous. It’s like Disney Hall in the Valley,” adds artist relations manager Catherine Kimmel, who helped book the talent for the gala with the show‘s director, Robert Egan.

The opening of the 166,000-square-foot Valley Performing Arts Center represents the culmination of decades of planning. The project is being funded by a public-private partnership, and has received $80 million in federal, state and county funds—including $2 million from the office of Supervisor Zev Yaroslavsky and $500,000 from the office of Supervisor Michael D. Antonovich— and $30 million from private individuals, corporations and foundations. The university is continuing a capital campaign to raise the rest of the money.

The gala promises to be a variety show in every sense of the word. How often do you get to see Calista Flockhart performing a bit of Shakespeare with fellow players including Benjamin Bratt, Keith David, Steven Weber, Noah Wyle, Jane Kaczmarek and Tyne Daly? Or to applaud Daly singing “Everything’s Coming Up Roses” from “Gypsy” as part of a Broadway segment that also features Davis Gaines singing “Music of the Night” from “Phantom of the Opera?” Or to watch Andy Garcia introduce Arturo Sandoval, the Cuban-born jazz trumpet great he portrayed in an HBO movie, opera star Carol Vaness sing Puccini and American Ballet Theatre stars Gillian Murphy and Jose Carreno perform a pas de deux from “Don Quixote?” There’s even a Cheech Marin comedy segment, not to mention taiko drummers, CSUN’s Jazz “A” Band and the Northridge Singers. (The full line-up is here.)

If you can’t make the gala, and are holding out hope for “Swan Lake,” don’t despair.